A few weeks ago, my non-gender conforming daughter (who is 8), and I were in a public restroom. As we were washing our hands, an older lady standing next to me looked at my daughter, (who was out of earshot at the hand dryer at the moment), then turned to me and said, “So, what’s the rule these days? When do parents allow their kids to go to the correct bathroom without a parent?”.

I fell silent for a second, completely confused as to what she was asking me. She took notice of my confusion and filled the silence with “You know what I mean. When will you allow him to go to the boy’s bathroom alone?”.

It took my brain a second to process that she was certain that my daughter was a boy and she was judging me, inferring he should be in his gender assigned bathroom.

The look on this lady’s face was somewhat indescribable. She could not have been more shocked, stammering and befuddled in that moment. I then saw the look of confusion take over her face, trying to make sense of my child’s gender and what I was saying.

She tried to backpedal and muddled something along the lines of, “Oh, well, well, I, um, just meant that she looks older and, um, I didn’t know…”.

My emotions were somewhere between annoyed, angry, and still confused by the whole conversation. The only thing I could choke out was, “Can’t judge a book by it’s cover, right?”, and she couldn’t manage any words.

First and foremost, stop judging parents, period, lady. Because that’s where she wanted to go with it, I’m certain. She wanted to get on her pedestal about how her generation allowed children to go to the bathroom alone at the age of 2 or whatever higher horse conversation she was encroaching on. I could hear it coming.

But secondly? This is exactly why the transgender bathroom debate makes no sense at all and is utter bullshit. Here it is. A prime example.

Here’s a person that assumed my child was a boy by mere esthetics. Boy clothes, plus boy hair, plus boy mannerisms must equal boy. She certainly could not see her genitalia. And because we were all in the bathroom to do what people do in the bathroom, take a piss, we were not bothering anyone. Why this woman felt the need to say anything at all is beyond me but by doing so, she proved a much larger point.

She proved that had my daughter been in the men’s bathroom, no one would have questioned her at all because she looks like a boy. If my daughter was/is trans, she’s visually acceptable and it would go without notice that she is in the stall next to another little boy. No one would know that she actually has a vagina.

The fact of the matter is, you have taken a squat in the very next stall to a trans person. You absolutely have. You just don’t know it. Because, as my daughter proved to this woman, looks can be very, very deceiving. Guys look like girls, girls look like guys, and trans people look like who they are. But more so- who cares?

Straight, gay, trans, bi- when we go into a bathroom, we all just need to go to the bathroom. That’s it. Pee, or take a shit, wash our hands, and move on. Why everyone is so goddamned concerned with our genitalia is bizarre. There are plenty of hard facts documenting that straight men are usually the perpetrators in any kind of bathroom assault or perversion so what’s with this preoccupation with transgender people or gender in general?

Since this whole bathroom debate began a couple of years ago, it caused me so much confusion about what it is everyone is so afraid of. I know the big bathroom debate is tired. I know it’s been written, it’s been discussed ad-nauseam. So, this is me half venting, half {hopefully} educating in a spill of emotion.

Regardless of what your bible might tell you or what “morals and ethics” you hold true, or if you’re just one of those that believe those that challenge gender norms are “freaks”, try to put that all aside for one second. They’re people. Just living. That’s it. They’re just human beings. That’s it. Normal, breathing, thriving humans that need to go to the bathroom. If you don’t want to try to understand anything else about gender issues, fine. But just recognize the simple fact that they need to go to the fucking bathroom, just like you.

It hurts so many people when we move backwards, back towards exclusivity, opposed to inclusiveness. The us-versus-them mentality. The you’re-different-so-you-must-be-wrong mentality. And we are, indeed, slipping backward.

I hope we can do better as a whole with this entire topic. I’m not overly optimistic lately.

But also? Don’t give unsolicited parenting advice. Ever.

And, Stop judging books by their covers. Let my daughter pee and mind your own business. 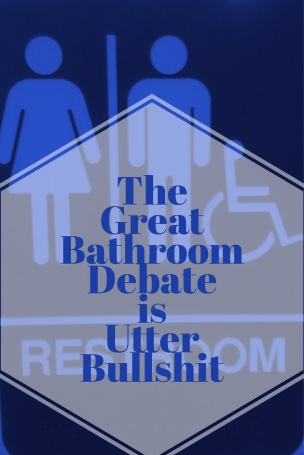 View all posts by vanessavnichols

9 thoughts on “The Great Bathroom Debate is Bullshit. Here’s Proof.”